Did she or Other Democrat Leaders pressure AIPAC to cover for her??? 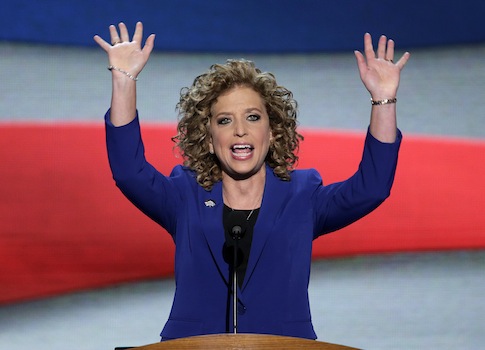 Reading Adam Kredo’s piece below, one might ask: Are there any limits to Congresswoman and DNC Chair Debbie Wasserman Schultz’s Chutzpah???

She often tells us – as she does in this testy interview with Andrea Mitchell – that as “a Jewish member of Congress, [she brings] her love of Israel to work every day”. (The entire interview is classic, but specifically go to the 3:30 and 4:50 marks for the relevant comments.) Perhaps there are few if any impediments to DWS’ political ascent, but that does not shield her from being exposed for her anti-AIPAC and anti-Israel dealings, which are in contradiction to the will of her very pro-Israel district with a large and affluent Jewish constituent base.

DWS’ clandestine efforts to influence otherwise pro-Israel Democrats to oppose Congressional efforts to legislate Iran sanctions were so outrageous as to lead our good friends at ECI to circulate a powerful video ad that aired during recent Sunday talk shows and football playoff games.

Furthermore, a baseless email from a pro-Obama Democrat AIPAC National Board member who enjoys his “access” doesn’t give Wasserman Schultz a pass.

Florida Democratic Party donors affiliated with the American Israel Public Affairs Committee (AIPAC) are coming to the aid of Rep. Debbie Wasserman Schultz (D., Fla.), who has come under fire in recent weeks over her efforts to quietly block new Iran sanctions measures in the House and Senate.

AIPAC’s initial letter on the controversy, which circulated two weeks ago, urged Wasserman Schultz’s constituents to “respectfully ask” that she clarify her position on the congressional measures and issue a statement supporting them.

Some pro-Israel activists in South Florida are not happy about AIPAC reversing course to defend Wasserman Schultz, who continues to stand in opposition to the group’s own legislative efforts.