En route to his meeting at the White House, the PM and the rest of the world read that the president believes he’s leading Israel to wrack and ruin. 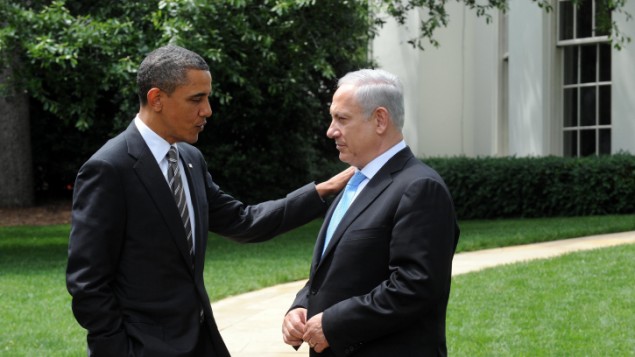 Hello, Mr. Prime Minister. You’re attempting to maintain “a chronic situation” as regards the Palestinians. You’ve been pursuing “more aggressive settlement construction over the last couple years than we’ve seen in a very long time.” There’ll come a point, you know, “where you can’t manage this anymore, and then you start having to make very difficult choices: Do you resign yourself to what amounts to a permanent occupation of the West Bank?… Do you perpetuate, over the course of a decade or two decades, more and more restrictive policies in terms of Palestinian movement? Do you place restrictions on Arab-Israelis in ways that run counter to Israel’s traditions?” But other than that, Mr. Prime Minister, welcome to the White House.

Until he read the breaking news of President Obama’s earth-shattering interview with Bloomberg’s Jeffrey Goldberg on Sunday, Prime Minister Benjamin Netanyahu might have anticipated that Monday’s meeting was going to be one of his less confrontational and unpleasant sessions of frank, allied diplomacy with his good friend Barack.

Sure, the stakes were always going to be high: The president was going to be urging Netanyahu to assent to Secretary of State John Kerry’s framework proposal for continued peace talks. And the prime minister was going to be urging Obama to toughen his demands on Iran, to ensure that the ayatollahs are deprived of the wherewithal to build the nuclear weapons they swear they don’t want to build, just on the off-chance that they might be lying.

But Netanyahu, his aides had long been indicating, was ready to accept the framework proposals — as a non-binding basis for further negotiations. So no need for confrontation there. And he must have held out little hope that he was going to shift Obama’s stance on Iran, however powerful he believes his arguments to be. So not much point in confrontation there, either.

But then came that bombshell Bloomberg battering.