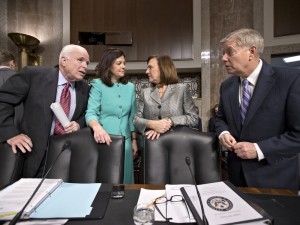 The Senate Armed Services Committee (SASC) voted along party lines Tuesday to send the nomination of Chuck Hagel to be the next secretary of defense secretary to the floor of the Senate, paving the way for a potential showdown over the embattled nominee.

The contentious 14 to 11 party line vote in SASC immediately spurred accusations that Senate Democrats had forced the vote despite growing Republican concern over Hagel’s lack of financial transparency. Sen. David Vitter (R., La.) was not present during the vote.

Republican critics allege that Democrats flouted normal procedure by refusing to permit senators enough time to fully vet Hagel, who has come under scrutiny for failing to disclose financial entanglements he may have had with foreign governments, including Turkey, Iran, and Kazakhstan, among others.

“I’m really concerned about process,” Vitter said during remarks before the committee prior to the vote. “This committee vote and this nomination is being rushed. We’re being asked to vote and required to vote before all reasonable request for information has been received.”

Vitter said that he has outstanding concerns about Hagel’s financial records and copies of speeches he has made over the last five years.

Other GOP lawmakers reiterated their concerns about Hagel during their remarks.

“His performance before this committee was the worst of any nominee I’ve seen for office,” said Sen. John McCain (R., Ariz.) “I cannot vote to report out Sen. Hagel’s nomination favorably.”

Sen. Lindsay Graham (R., S.C.) said that Hagel is too far outside of the mainstream to be assume such a sensitive government posting.

“There’s an edge about him that makes some of us very unnerved,” Graham said. “There are very few people who have been this wrong about so many different things.”