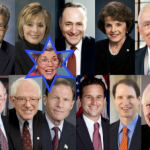 With Democrats poised to ram former Senator Chuck Hagel’s nomination through the Senate, despite Hagel’s refusal to turn over all relevant financial records and speeches, all eyes should now turn to the Democrats who portray themselves as pro-Israel.

If a Republican president nominated someone as anti-Israel and borderline antisemitic as Hagel to Secretary of Defense–say, Pat Buchanan–the press would rightly have a field day. But when President Barack Obama does so, aided by self-interested politicians who proclaim their abiding belief in the ties between the United States and Israel, the press remains silent.

To recap: with his openly expressed negativity toward Jews and Israel, Hagel is the most problematic candidate for a high post in an administration in decades. Between his apparent willingness to countenance accusations of Israeli “war crimes,” his support for negotiations with Israel’s terrorist enemies, and his unwillingness to express support for Israel in the face of Palestinian terrorism, Hagel’s anti-Israel credentials are well in order. Add in Hagel’s attempt to shut down the Sixth Fleet’s USO Center in Haifa (“Let the Jews pay for it,” he spat), his scornful assertion that he is not the “Senator for Israel,” and his belief that the so-called “Jewish lobby” intimidates members of Congress, and you’re looking at a bigot.

And yet the Democrats, including President Obama, continue to push Hagel through. That’s no surprise from an administration that treats Israel more harshly than it treats most of America’s enemies. But it is a surprise from the Jewish members of the Democratic caucus, who should know better–not because they have dual loyalties, not because they represent a “lobby,” but because Jewish politicians above all should understand the importance of a safe and secure Israel.