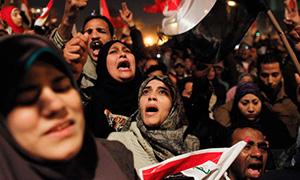 Raise your hand if you heard the Obama Administration and Tom Friedman Embracing the Arab Spring and the Brotherhood’s accounting for “10-15%, at most”

Only in the minds of the naive Obama Administration or the New York Times ever-reliable-for-a-good-fantasy Thomas Friedman was the Arab Spring refreshing. Out of Egypt, as they say, come a series of deeply troubling, war-mongering videos and speeches by the country’s new leadership.

I was never fooled or naive about it, nor were many of you. The same thing happened in Iran 33 years ago – using the same promise of “democracy”. The storyline is nearly identical. (See this excellent piece by Raymond Ibrahim – click here)

Now, after Obama, Hillary Clinton and Thomas Friedman all told us that we should embrace the “youth movement” and “democracy” in Egypt, and – as many may recall – that the Muslim Brotherhood would at most represent 15% of the vote in Egypt, comes the harsh reality. Don’t believe me – listen to Egypt’s newly-elected leader:
“Our Capital shall be Jerusalem, Allah willing”
“The Capital of the Caliphate – the United State of Arabs – will be Jerusalem, Allah Willing”
“Millions of Martyrs will march to Jerusalem”
“Gaza will be liberated”

And for the bright-eyed, bushy-tailed liberals among us, check out the new Egyptian President taking direct aim with his immediate war on women, and Islamic imposition of strict social guidelines. (Sharia, anyone???)

If Progressives want to see what a “War on Women” really is, they must wake up and reconsider your unholy alliance with Radical Islam.