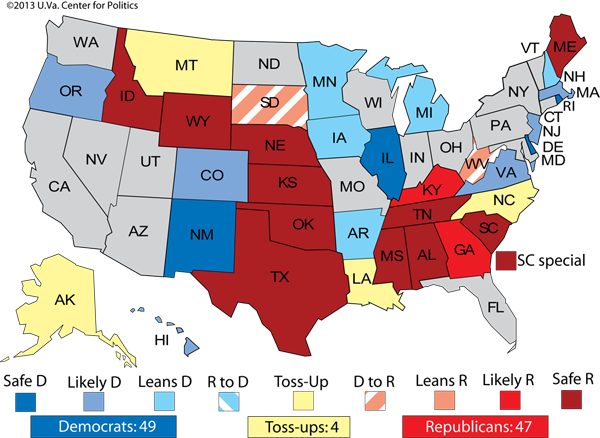 Next year’s Senate landscape has long been regarded as treacherous terrain for Democrats.  In 2008, Barack Obama’s blue wave swept many Democrats into office, including more than a few from red and purple states.  That year’s Senate class will soon be up for re-election in a non-presidential year — which means a smaller, more informed, more Republican electorate, and no help at the top of the ticket.  As Dan reported over the weekend, Democrats’ top recruit to run for Max Baucus’ soon-to-be-vacant seat (former Gov. Brian Schweitzer) has begged off.  Instead, the party will likely nominate either a failed 2010 Congressional candidate, or the president of an organization devoted to abortion.  This development has many political handicappers sliding the Montana race into the “leans GOP” column, alongside two other contests for open seats in red states.  Republicans are favored to win in West Virginia, where Sen. Jay Rockefeller is retiring, as well as South Dakota, where Tim Johnson is stepping down.

If they carry the day in those three races, Republicans would be halfway home to securing a Senate majority.

(Editor’s Note: this map was prepared before Montana’s Dem. Gov. Brian Schweitzer’s decision against running for Senate from that state.)